It’s rare for a teen idol to be a role model. It’s especially rare for a teen idol to be a role model for an extended period of time. We have Lindsay Lohan in and out of rehab, and claiming to have miscarriages. Rihanna looked pretty good there for a little while but then she got beaten up by her boyfriend and decided to give her image an overhaul, including whips and chains. Miley Cyrus started out as a wholesome girl from the south, then did a 180 and decided to become a hypocritical hip-hop princess, smoking massive amounts of weed and telling the world about how Molly (MDMA) is a super fun social drug. Can I get a “Yuck”?
Basically I’m pretty unimpressed with most of the women who are in role model positions these days. I don’t think young girls need to be absorbing positive messages about drinking, having a bajillion boyfriends, divorce, drugs, or whatever the new trendy diet is. There are so many influential celebrities out there who seem to be using their platforms to market a lifestyle that isn’t appropriate.
Thankfully there are celebrities that have proven their worth by being honest with their fans about what kind of life fame has built for them. Demi Lovato has told her fans and the world as much as she can about her struggles since going to rehab in 2010 for substance abuse, eating disorders, and self-harm. In a time when a lot of celebrities keep their insecurities and character flaws to themselves, Lovato has been humble and open about her issues in order to give her fan base a stronger, healthier role model.

While it’s easy to feel disconnected from a superstar, I’ve found Lovato to be one of the few that I feel I can trust. Having battled myself with self-harm in the past I find myself able to relate to her, and hearing her say in interviews that making the right decisions is difficult, and that mental and emotional health is something to strive toward every day doesn’t sound to me like a phony, preachy celebrity. Lovato sounds like the girl I would want as my sponsor if I were fresh out of a rehab center. We would be able to have some real talk, she would obviously be excellent at sportively reminding me to check myself before I wreck myself, and then we’d eat lunch and talk about boys and fashion and her crazy tour schedule… I’d even let her help me pick out a new tattoo. Okay, basically I’d totally be her BFF if I had the chance.
The fact is, I know for a fact that she’s cool. My second cousin, Maggi, (AKA the most adorable girl in the world) got the chance to quickly meet Lovato at LAX, right after these photos were taken, and she has kindly let me share her story here about what it was like to meet one of her role models.

“I really like Demi. I’ve liked her since she was on Sonny with a Chance. I think she is an amazing person for being able to admit her struggles and being so open about them. She is a great role model. I used to self-harm, and it was amazing to be able to look up to her and see that even a celebrity wasn’t happy with herself but was able to get help. I love how she says what she thinks and sticks up for herself. I also love how although she had an eating disorder, she is recovered and now curvier than some other female celebrities and accepts her curves.
I was at LAX for a flight home, and she was catching a flight to Brazil. She and I were at security at the same time. She was actually being patted down! I wasn’t 100% sure it was her, but I saw her “Stay Strong” tattoos on her wrists and I knew it was her. When I went up to ask her for a picture, her bodyguard or whatever he was shook his head at me and said “no, not today.” I turned to Demi and said “I’m really sorry, I don’t mean to be annoying but I was wondering if I could get a picture with you.”
She made a face at him, came over to me, and said “he’s got a stick up his ass. Don’t worry about it.” I only got one picture because of how hard I was shaking, but she put up bunny ears behind my head that I didn’t get in the picture. She smiled at me and as she was walking away she turned around and said, “It was nice meeting you!” She was really sweet! I kept freaking out because she has been such a role model to me with her self-harm. I wish I had gotten the chance to tell her that or ask her for a hug, but by the time I got my brain together she was already gone.”

See what I mean? I would totally BFF her. And here for your viewing pleasure, the adorable Maggi and Demi Lovato. 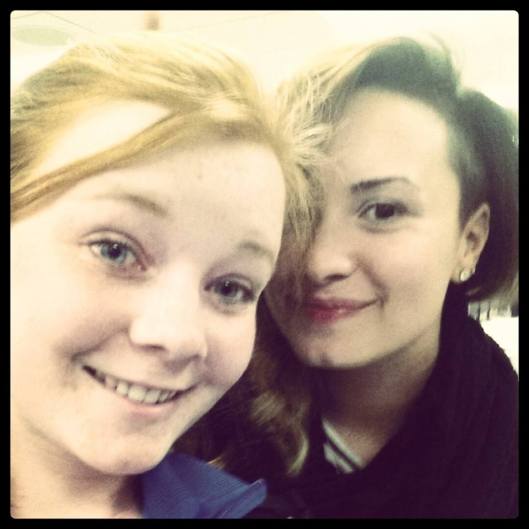 1 thought on “Thoughts on Demi Lovato”